I’ve heard that from my boyfriend more then once… per day.

It usually happens when I start trying to tell him about something, or describe something that happens to me. Usually at work.

I mean it’s really easy to understand “there was a snake in a storage unit”. Yep, that is simple enough. Snake. Storage unit. Screaming customer. Animal control. Oh wait, cameras?

But sometimes I get excited, and the words start tumbling out of my mouth. Worse yet, sometimes they get stuck somewhere between my mouth and my tongue. I don’t know why, but it is far easier to get the words out when I type then it is when I speak. I suppose it’s a good thing I decided to be a writer and not a stand up comedian, because people don’t find comedians funny if they sit there saying “um” all the time.

I really have no point to this post. But I will let you know, if you’re still reading this, that I am half way done re-editing “Small Bites – Complete Collection” along with the extra content, and formatting for a physical book. The paperback will take an extra week, but the ebook should be available this weekend. 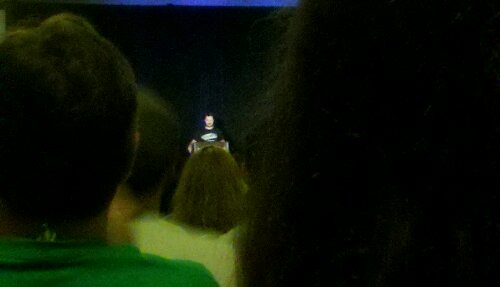 The conference rooms aren’t really set up for this as far as I can see. And the audio is a bit low. But worth it? Heck ya!

Now, I am bias. I’ve been a Wheaton fan since I was 10 years old, watching Star Trek TNG and harboring my secret crush on the ultra intelligent Wesley Crusher. But Wheaton, himself, is incredibly funny and knows how to tell a good story. And his stories matter to the crowds that show up to see him because most of us were/are nerdy gamers who played a lot of the games he did, and had similar experience (minus the awesome Enterprise crew, though we envy that.)

Sadly, the Fawkes Guild comic that I had, wrapped in cardboard and safely stuck in my hard hard cover D&D book to avoid crushing, went unsigned. Being a brand new PAX goer, I was lost, and given bad directions. The line was closed before I got there. Maybe next year?

So many games, and so little time. I demoed about 20 of them, watched people playing several others. Watched people be the aliens hunting down space marines, and killed a zombie in Walking Dead after learning she was probably a little girls baby sitter. Got t-shirts, pins, and coloring books….

All in all PAX was amazing, and I’ll be going next year.

One of my favorite writing exercises is the random word. Several years ago I joined a writers workshop that did Short Story in a Week. Five groups of five random words were given, and participant could use one or all of the lists in a short story exercise.

Random are great ways to generate ideas. Take this generator.
It gave me these words:
cheese
empire
attack
fairy
sky

The fairy empire is in heated battle with the cheese loving citizens of Wisconsin, and taking to the sky, ready to attack!

A silly sentence, but fun, and able to add more ideas.

Search for random word generators on google. If you have a specific genre you like then add that genre. Try it a few times to get the creative juices flowing.