Well… It’s the new year and time to go over my stats for writing, as I have for the last four years. And boy is it an eye opener. 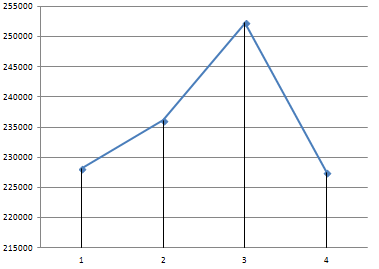 First, I wrote 20,000 words less than last year. Admittedly, last year was a fantastic year and I wrote 15k more than any other year. I also lost about 12k just by loosing NaNoWriMo this year. I took another huge dip around the time I switched jobs. Clearly major changes have made huge differences in my writing.

But all these numbers forced me to go back and really look at what I’ve accomplished over the last four years, not just in amount of words written, but what I’ve published.

I started publishing in 2012 with three short stories and a novella. Not bad for my first year. 2013 followed with 16 short stories, a novella, and a short novel. 2014 saw a single publication, and a short story at that. I had to go back to my stats for that year and find out if that was true. After two years of writing, and publishing tons of short stories suddenly…NOTHING! But there was a reason behind it. In 2014 I published one short story, and I wrote the majority of the three Witch’s Trilogy novels.

In 2015 I started actually publishing the Witch’s Trilogy. Two novels, and one little short story. 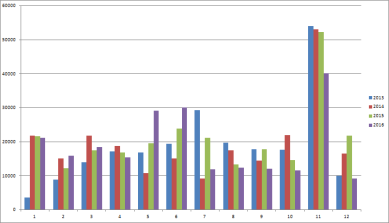 And 2016, the year that we just finished? I finished the Witch’s trilogy, publishing Witch’s Stand in April, then added a short story prequel in May. I also published two more short stories in my Illicit Gain’s series (Mirror and Scarab Necklace) bringing the total to three short stories and a novel for 2016. What else did I do for 2016? I started on my next novel series. Of the 230k words I wrote this year the majority of them went to “Half-Blood Sorceress”.

When I first saw that list of publications, and how many of them happened in 2013 I was a little shocked. Then I remembered that a lot of the short stories I finished, and published, for that year were already half finished when I started writing them. That while it was a big publishing year it wasn’t a big writing year, I was just finishing words of half completed projects, not taking on as many new challenges.

Even though 2016 saw less writing over all, it was still a productive year. I completed the trilogy, found a new job, and started on a new series that I have already put down 78,400 words in just a few months.

I’m working to get the first two published in 2017. I do not know if that is possible because of editing and cover design, but at the very least they will be written. But since I’m focusing on Half-Blood Sorceress it means I might not publish anything else this year, just like 2014. And I think I’m okay with that.

The Witch’s Trilogy is good because I took the time I needed to write the books. I didn’t rush it, and I’m not going to rush Half-Blood Sorceress either. I want the series to be good, and go on. I have five books planned, after all, and I want to finish all of them.

Learning to write faster was a great help in 2015. It pushed me through, got Witch’s Trilogy finished, and helped me complete something. I need to find that fire again. That’s what I’ll be working on for 2017. Writing, finding the passion for the writing, and making it the priority again.

I have been doing a lot of reformatting lately. Adding in better back matter, adding in a little notice about the news letter and a offer of a free book. Little things here and there that take forever, but they go a long way to making a book look professional.

It’s amazing how much my ideas of a “finished” book have changed over the last two years. Even my covers have improved dramatically. But none so much as my print books.

When I first printed the original print editions of my various books I did okay, got the right page size and put the beginning chapter on the right side of the book. I even added a page of reviews so anyone picking it up might see that I had at least some accreditation. They looked good.

When I got to “Witch’s Sacrifice” I did everything the same way, or so I thought, and ordered the proof. The text was itty bitty and could barely be read. I adjusted, sent a new one and found that I forgot to add the front matter. Tried again, upped the font size and added the front matter. Adjusted the table of contents since that always changes when you adjust the font. This version was readable, but I still wasn’t quite happy with it.

It turns out I was using the wrong sized pages when creating the print files for “Witch’s Sacrifice.” That meant when it was shrunk down by Create Space the font shrank with it. When it printed the text ended up being off in every way, as did the page numbers, maps, and everything else.

I didn’t bother changing it after the last time. The text wasn’t too small, so it didn’t look horrible, but it wasn’t exactly what I wanted either, but I knew that I’d have to get to it eventually along with all the other little things. Last week I finally took a few days to start reformatting. 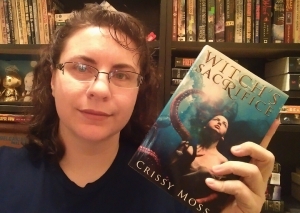 It is amazing how big a difference it is just to have everything the correct size. It’s about a one hundred page difference. After adjusting the size of the page and putting in the correct size text made the book feel more substantial, like a real novel.

I got the new and improved version of “Witch’s Sacrifice” today, and it’s beautiful. It’s everything I wanted it to be, and now I know how to format the other two.

“Witch’s Stand”, the final book in the series, will be going to the editor next week! I will also be getting the cover done at the end of the month. That means I will finally have a finished trilogy! SQWEEEEEEE!

There is one more story in the Witch’s Trilogy, and that’s a short story about Salvia, the little mother, and how she learns that she is a witch. I haven’t decided if I will be giving this away for perma-free, or just sharing this with my newsletter (though my newsletter will get it long before anyone else does.) However, once that is done I will be putting out a combo pack that has all four stories in it. I will hopefully have the other print books out as well, and might also get a print book of all four together depending on how long it ends up being.

But right now we’re getting ready for RadCon. If you’re there let me know, I’d love to meet you.

So much going on this week.

“Witch’s Curse” is out! The second book in the Witch’s Trilogy is available.

If you haven’t read book 1, “Witch’s Sacrifice“, and you’d like to then let me know. I’ll happily give you a free copy.

Since releasing “Witch’s Curse” I’ve been hard at work finishing “Witch’s Stand.” Currently done editing 11 of 32 chapters. The other chapters have been roughed in, but I have to finish writing them. That and all the battle scenes. I am sure everyone knows how much I love the battle scenes.

I’ve also been working on getting more audio books out. “Small Bites the complete collection” was just released a few days ago. It joins “Footprints” and “Prophecy by Barlight”. You can find them all here.

I hope to get more audio books up eventually. I have “The Ring” finished, but had some tech difficulties getting it to work so it isn’t actually out yet. I need to take care of that soon. Hopefully I’ll have a chance to do the rest of them as well.

It will be quite some time before I am able to get the Witch’s Trilogy up as an audio book. Since it is a full novel it’s less likely anyone will do a split pay for that until I have a lot more readers. The short stories are less time investment and gives new audio book readers something to add to their portfolio. A nice strategy for them, and for me.

In between writing I’ve been putting in a little bit of time on Twitch. Not a lot since I’m not looking to make it my living, but I really do enjoy talking to people who stop in to watch.

I also posted a vlog about the house buying process (and the failures there of). And I’ve been pretty active over on Instagram, mostly sharing drawings and sketches that I’ve been doing.

I’ve got one other big project that I’ll be doing this weekend since I have a three day weekend. I think I’ll post some pictures, but for now I will give you this hint: Cosplay.