It’s just about time for Twitchcon. If you’ve been following me on twitter you might have seen pictures of my boyfriend, Bjornsworkshop, and his giant suit of leather armor! It’s amazing. I love it! I can’t wait to see him on stage at the cosplay competition!

We are driving down in October, staying for a few days, and then driving back home to Seattle. It’s going to be a long, exhausting, wonderful trip.

And the best part about it is that he was voted in. All you wonderful people, and the people in his stream, and family and friends, voted for him so he got the first spot in the armor category! So much love and support, it’s been amazing to watch.

We will, of course, be sending out some vids for the trip. We have to share our journey with everyone. Maybe I’ll start vlogging a bit more this evening. Of course his whole build is on twitch right now, too. 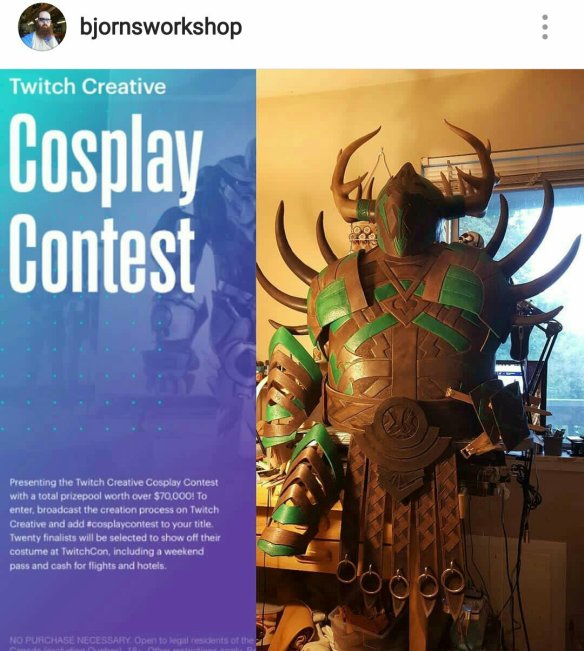 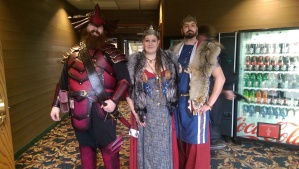 Now that I’m getting over the con-crud I thought it was time to share what happened at RadCon with everyone, and what I took away for myself from it.

First: Radcon was amazing! So many amazing things happened, so many new friends, so much new information. Gregg and I had to take some time to process it all. It’s been a week and the excitement of RadCon wore off a little bit, but the knowledge and encouragement are still working.

For Gregg this was a moment of validation. He won the best in fantasy for the masquerade, then he was invited to stand up at a panel and talk about his armor, and the road to it’s completion. He had several of the speakers (men and women currently working in prop/armor making for TV and movies) there oh-ing and ah-ing over his armor. Then they invited him to be on a panel next year as a full member. It was overwhelming. Gregg might have done a happy dance a few times, and then just collapsed from sheer joy.

It was so amazing to watch him transform from the unsure, self critical person he had been into this massive beast of a man walking through the crowds with his head held high, clad head to toe in red and black armor that he made with his own two hands. The pride, the smile, the final moment when he could say “I did something great!”

Sure, there are still little imperfections that bother him, little things that stand out as “I need to fix that.” Every creator has that little voice in the back of their mind saying those things, and we wouldn’t want to make our stuff better if we didn’t. But…as one of the panelists (a man who works on Grimm) said “There is only one person who sees all the little mistakes, and that’s you. Everyone else just looks at the overall piece.” (paraphrased, of course.)

I watched his transformation with pride, and happiness…and maybe a little jealousy. I realized that I needed that same transformation for myself. The same validation that yes, I am a good writer, and yes I’m on the right path. And I realized that I didn’t know how to get there. For me…it was a moment to realize that I need to get my shit together and figure out what the hell I’m doing.

So for the past week, while I’ve been battling con-sars, I’ve been thinking about my writing career, where it’s going, and what pieces I want or need to change.

First of all, The Bradbury Challenge has been a fantastic thing for me to do. NaNoWriMo has it’s good points, especially in learning to write faster and let go of the inner critic, but the Bradbury Challenge focuses on finishing things, and really need that emphasis on getting things done.

I haven’t been doing well. It’s been seven weeks and I’ve completed three stories. That’s not a story a week. This week I had a good excuse. First the convention, then a horrible head cold that knocked me out for three days, and left me incapable of writing. But what about all the other weeks? What excuse did I have then? And were they really good enough?

Now the truth is I have written almost every day since November first, and accomplishment in itself. I put down 6.4 thousand words on my novel last month, getting it closer to publication. I wrote 11k more on the short stories I worked on. But I didn’t finish all of the Bradbury stories. I didn’t send them to my newsletter as I promised. And this month I’ve only written 5k so far.

I should at least be continuing with a story if I fail to finish it the week previously. Instead I have come up with new stories every week since January first, and written plots and paragraphs for all of them. I LOVE the idea phase of a story a thousand percent more then actually finishing a story. Brainstorming is second nature to me, and if I get an awesome idea for a novel I have no problem jotting down 3-5000 words in a couple hours on that idea.

But ideas don’t make a career. Ideas are just that…ideas. They have no form, no function, and no monetary value. If all of my stories stay ideas I get nowhere. I get no actual career.

This, I think, is what I saw with Gregg and his armor. At the end he was sleep deprived and his body was screaming for relief. He kept telling me about pains in muscles he didn’t know existed, or his hands cramping, or being surprised he didn’t break something when he hit his hand with a mallet. But he kept going. He wanted to finish that armor. Not just a few pieces, he wanted the whole set.

Do I want my writing career even half as much as he wanted that?

It is no surprise that they invited him back to speak at the conference. It is no surprise that he had many people in his industry talking to him, encouraging him, and telling him how truly awesome he was, and is. Because he is amazing! He has persistence, and he has a passion, a real hunger, for his craft.

Do I? Or is this more of a hobby that I just enjoy when I’m not playing video games? I don’t think it’s a hobby, but then again, where are the finished products?

That’s the question I’m going to be asking myself the next couple of weeks as I am working on my short stories, and finishing things. I’m not at 100% yet, still recovering from this sickness, and still very, VERY, tired. But that’s nothing but an excuse, and I know it.

So are my passions bigger than my excuses? Time to put up or shut up, I think.