The latest controversy in the book world is JK Rowling and the lack of a gay character story line. She said Dumbledore was gay in a tweet, but he is not explicitly shown as gay in the new movie. Of course the new movie isn’t even out yet so we don’t know if it references it at all, or even if it’s relevant to the plot.

Of course people are upset because of representation or personal desires on how the story should go…and I have to say as a writer this worries me just a little.

Right now LGBT books are flying off the shelves pretty fast. If you watch booktube most of them will talk about books that are LGBT quite often, and go into detail about how it effects them emotionally or mentally. And that isn’t a bad thing. I would even say it’s good for those authors to get exposure to the people most likely to read their work. And it’s awesome that people are interested in this subject matter and have so many books to choose from.

The part that bothers me, and has always bothered me, is when rabid fans love a franchise so much that they want to force their ideals on the creator.

This is not an exclusive thing to (or a characteristic of) the LGBT community, or young adult fiction, or books even. This is usually a small, but vocal, subset of a much larger group. For ages we’ve had Disney fans pushing for changes to Disney characters. Or rabid Star Wars fans upset about the new movies. Or the backlash over the Witcher being all white characters.

It’s one thing for people to write an article about how they didn’t like it because x, y and z. It’s one thing to have fans write in or tweet or Facebook that they would love to see x, y and z. But it’s an entirely different story when people start attacking because “this thing I care about isn’t in your story”, or brigading, or stalking the author, or threatening her, or…. Etc. Etc. Etc.

I started writing because I didn’t see characters like me. Meek young girls coming from an abusive past that made a new life for themselves. Girls who had their voices taken from them and fought like hell to get them back. Women who loved, and hated, and hurt over and over again…. And learned to stand on their own two feet.

I couldn’t find those stories so I started writing them.

And I started looking for them a little harder, in unlikely places. And I found them.

Vote with your dollar. Go buy LGBT stories from authors and find new franchises you like. You don’t have to force someone else to put something in their story that they feel doesn’t fit, or they can’t write, or they aren’t able to do justice, or they just don’t want to do. I don’t write erotica for that reason, and I’d ignore anyone that told me I had to write it, too. It doesn’t fit who I am. I haven’t published an LGBT character yet because I haven’t finished the story. But does that make my other stories less valid?

And if you still can’t find what you’re looking for… Write it. Draw it. Sculpt it. Put music to it. Do the art you want to see in the world, and love the art that is already there. You can love the other art for what it is instead of pushing it to be what you want. Or just walk away. After all, if it didn’t sell she wouldn’t be able to keep writing it. 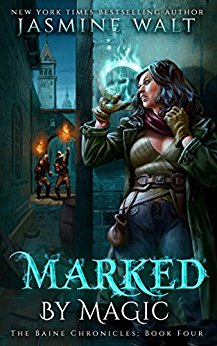 I just finished the fourth book in the Baine Chronicles, Marked by Magic, by Jasmine Walt, and I just had to share it.

I love this series. So many parallels to the real world, and yet still firmly rooted in it’s own magical world. A lot of action, and some romance, with a lot of mystery and political maneuvering. From the ending I think there might be more political intrigue in the next book as certain people try getting in between the main character and her romance. Looking forward to that as well.

This is quickly becoming my favorite series to read this year. Without coming out and saying it directly, Miss Walt manages to talk about difficulties when different races, religions, and political beliefs clash. By using a person that has never quite fit into any of those spaces, and suddenly gets thrust into the world that she has been taught to despise her entire life, Miss Walt is able to show the ugliest parts, while also showing that there are good people out there too, and most of them are just trying to feed their family and get by.

The world, itself, is fascinating, too. Magic, steam power, and the budding influence of technology. They have electricity, but they don’t have automation. Steam cars, and air ships, but guns and minting actual gold coins is illegal. I love the way she builds this world, and balances the three races of human, shifter, and mage.

For this specific book in the series Miss Baine has a target on her back, and has to get to the bottom of the renegades before someone gets to her first. While there is romance, this book is more about Miss Baine learning to control herself, and her actions than it is the romance.

All in all a great book, and series. I’m glad I picked up the whole set.

You can pick up the first book in the series, Burned by Magic, for 99 cents!