I mentioned that I wrote a blog post and would post it when I was on Buddy’s Writing show the other day. Sorry for the delay, but sleep wouldn’t allow me to put it off any longer. So, without further adu, the Grasshopper Method:

People often ask: How do you write?

It seems like a simple question, but everyone has a different answer. The most common is “put your butt in the chair and write.” But that doesn’t answer HOW you write. For that most people talk about pantsers, plotters, and in betweeners.

I do something that is part pantser, part plotter, and part crazy person who likes shiny things far too much. I heard someone else describe it as “the grasshopper method” and thought that fit perfectly.

Let me try and put it visually, and then maybe you might start to see why it’s…well you’ll see.

The shower door is your blank page. It is where you are writing the story. Just beyond the shower door is the entire plot of the story, from beginning to end, neatly laid out in story boards. Through the clear places in the fog you can see little glimpses of the story: a character, an item they are searching for, the ending. The rest is obscured by the fog.

When I finally sit down to write a story I usually already have most of the plot in my head. I can see vague glimpses of the story because I’ve been chewing on it for several months, or years, already and have built it up in my subconscious. Little pieces might be missing, like how they get from point A to point B, or why they did this thing toward the end, but the majority of the story is right there behind the fog.

So I start clearing away the fog to get a clearer view. I jump to this patch that seems a little brighter and find the young prince and his entourage assaulting a toy castle in their pajamas. Up above that I find a mother desperately trying to keep her calm as her world is falling apart. I find a glade where something magical is waiting to be found, but I can’t quite clear away enough fog to see what that item is. I keep clearing, and I keep sorting, and eventually there comes a moment where everything snaps into focus. The last bits of fog are gone and the entire story board is laid out. 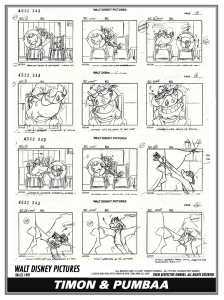 If you have seen a story board you know that it is made of a bunch of pictures. Each picture represents a scene. Once you have all the pieces of the story board you don’t quite have a complete story yet. Sometimes you have to rearrange things so they make more sense. Sometimes there are scenes in between the scenes that are missing. A lot of the time it is just a few little strokes of a pen (or in a writers case, a few paragraphs) that connect two of the pieces together.

The grasshopper method is not for everyone. In fact I would say it is something to be avoided. I don’t only skip between scenes in a story, I sometimes skip between books in an attempt to find some thread of a story that will come to the surface of the fog in my mind.

This has lead to other problems. It’s unlikely I will ever have a co-author because who could work with someone who can’t work in a straight line? I’m unpredictable, and I am constantly changing.

I’ve gotten better over the years. I’ve learned to do some beats to make the story boarding process faster, but even then I sometimes can’t seem to focus on one board at a time, I have to skip around to find the one that is speaking to me that day. Story beats have increased my output from two hundred words a day to almost a thousand though, so I’m not entirely upset about it. My goal is to get to three thousand words a day by the end of the year. It’s going to be tough, especially since half the year is already over. I’m giving myself permission to take breaks for marketing, editing, formatting, etc etc. And just to have fun. But if I can writing more on the days I do write it means I can have a lot more finished by the end of the year.

With the grasshopper method it is more about spending the time with butt in chair then anything else. The more I write the closer I get to completing something. And sometimes that means having several projects done in close succession, while other months it means nothing is finished. It’s frustrating. But it’s also the way my brain works.

Just a reminder, you can find my email newsletter here to find out about new short stories, or novels being published. Sometimes they are free. Also, Witch’s Sacrifice is out. It will be $2.99 till the end of the week then it goes up to $4.99. I should also start having audio books out next month.

I’ve actually been thinking of how to add audio or video podcasts to my blog. I’m rather afraid of speaking in public though, so doing it on my own didn’t seem very appealing.

Enter the snazzy group of guys who follow Self Publishing Podcast, and Story Telling Podcast and they decided to do their own podcast, and invited me to join.

We will be discussing the two podcasts we all follow, and anything else interesting in the publishing world. News, articles, controversy, etc.

No idea how this is going to work, or if it will go smoothly. I don’t really care, it sounds fun.

So, look for our new podcast this friday. I will post a link, and embed a video.

I’ve been trying to surround myself with people who believe in me, and who push me to do… better… to do things I am not comfortable with.

Alright, lets be a bit honest. I think I have a touch of social anxiety disorder. No, I haven’t been diagnosed, and I don’t think I have the full onset disorder. I just know that sometimes I have to retreat from everything, and everyone, and hide in a little space where I slowly breath and cry, and try so hard to forget there is anything outside my little head. Try to find a place that is safe, and secure. One where the world isn’t closing in on me.

I do this as a self preservation technique. I actually started it when I was in my teens, and during my marriage it got worse. Since my divorce it doesn’t happen very often, but when it does happen the moments can be almost more overwhelming. I think because it use to be a constant stress that I was holding my walls up against  and now that the stress is gone I have let most of the walls down, so when a sudden stress happens it gets closer to me. Closer to my core, and my identity. It hurts much more and I have a bit of a freak out. But I also recover a lot quicker then I use to.

So that brings me to today, and The Story Telling Podcast. Sigh, and YAY at the same time.

Okay, I really like Garrett, and I consider him a friend. An internet friend, to be sure, but a friend. He’s read one of my stories, given me a nice review, and said “KEEP WRITING” often. That means a lot to me. Oh, and he’s actually laughed at my jokes, which doesn’t happen much.

So today… Garrett asks for people to call in and leave voicemail, and he CALLS ME OUT! Okay, so I watch every episode. I tweet them during the show. I comment, etc. etc. I suppose I deserved it, but…

No one knows this. I’ve been trying to get the nerve up to do some audio recording. I’d like to record one of my own stories, or just a little mini podcast on my blog here. But every time I pull up the recorder I look down at the glowing red button… and… freeze… It scares the hell out of me.

I am so afraid of sounding like an idiot. With type I can change the words, rewrite, edit, and adjust things for a while, and then release it to the world. With audio it starts with the fact that I absolutely hate my voice, and ends with the fact that I can’t think of words when I am speaking. They just suddenly fly away into the surrounding air, unwilling to land upon my tongue. I have no idea why I don’t have that problem while typing, but with speaking… it’s a HUGE problem.

But, on this journey that is my life I am trying to improve myself. I am trying to do things that make me uncomfortable and doing more. Doing things to get where I want to go.

So yes, Garrett, I will send you a comment or question. I will be your “bathtub girl”, lol. I will be scared, but I’ll do it anyway… Because I can.