We left the house at 7am this morning. This from a girl that doesn’t usually wake up till 11am because I work nights, but we needed to get over the pass and into Pasco before my first panel today. 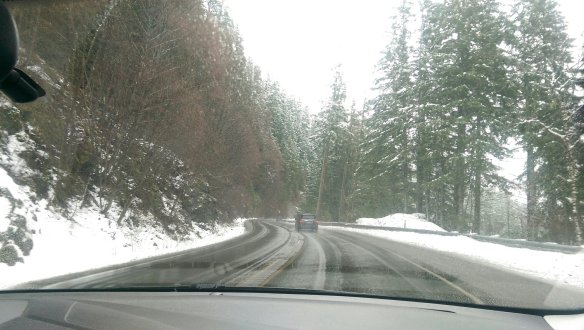 The pass we usually take was closed due to snow so we had to take the longer route. It was also snowing but not as bad as the main route. It will also be better when we drive home because it’s closer to Pasco so it will still be light when we get there. We usually end up driving over the pass in the middle of the night, and that isn’t fun when it’s snowing and you can’t see any lines on the windy roads.

We made great time and got to Pasco just after 2pm. My first panel was at 3:15 on (re)tired genres. It was a good discussion with several other authors. We mostly talked about revitalizeing “tired” genres and making something new from them. The second panel was right afterward concerning how big a fish you need to be. Another good panel with a couple of good authors. Neither panel had very many people in the audience, but it was day one and the majority of the participants get here on Saturday so it wasn’t that surprising.

Still, it was awesome to get to be on the panel this time instead of listening from the audience. And I love that my badge says pro.

After my two panels we had dinner, than headed back to the room where I finished Ghostly Intentions”. That means a new edit when I get home, then I can publish this thing and get back to work on the next Half Blood Sorceress novel! Yes!

Also, Prophecy by Barlight is free this weekend. And if you’re in Pasco I’ll be selling some paperback books and giving away pins.