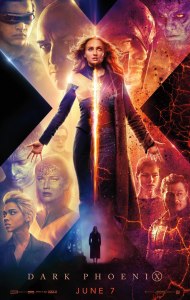 We just got back from the Dark Phoenix and… it was okay.

There were some great action scenes. I loved a lot of the special affects. The actors did a great job with the story they were given. There were, however, a few things that didn’t make sense. Unfortunately the part that made this just okay, and not amazing for me was the character development. It really didn’t have time to develop as we hopped around from one place to another so that Fox could bring in all of their licenses characters with impunity.

I feel like the Phoenix Saga could be an amazing series, or a trilogy that is allowed to develop and mature. Let the audience fall in love with the characters, see their pain and turmoil. Don’t just cram it all into two hours and say “there’s a movie for ya.”

I actually thought Sophie Turner did an amazing job of playing Jean Grey. I wasn’t sure it would be a good fit since I had only seen her in GoT before, but she did very well, and very shortly into the movie I just saw her as Jean Grey instead of Sansa. But the plot was clipped together, with large parts of her story left feeling…unfinished. This wasn’t Turner’s doing, but rather the stiff formatting of the film.

This could easily have been broken into either two or three movies. First section would be her getting the power of the phoenix and disappearing. Second would be her coming to terms with everything. That would have fixed a majority of the problems in the film.

The cringiest part was Raven saying “maybe this should be the X-women.” She conveniently forgets that Nightcrawler and Quicksilver did most of the work and complains to Xavior that the women are doing all the saving of the men. So ridiculous. There’s nothing wrong with girl power, but please can you respect the other people that help you regardless of their sex? (The rest of the story had nothing to do with women power, it was just a throw away comment that stood out for how terrible it is.)

There were a few other sections that felt stilted, or off. A lot of it boiled down to rushing the plot and not giving time to develop the intentions and transition of peoples ideas. One second they want to kill someone, the next they decide to save her. The switch happens so quickly that it was unbelievable.

Overall it was an okay film. It did have some cool scenes, and I enjoyed seeing the phoenix effects on the big screen. I probably wouldn’t watch it again though.