“Forgotten Ones” is finally here!

It is on Amazon for $2.99 for the weekend. I will also have it on Kobo soon. A print book should be available by Nov.

The story of the goddesses of Fate in the modern day, fighting to save humanity from one of their kin.

This felt like it took a long time to me, but I realized this is actually the fastest I have ever completed something this long. Three months, 30,000 words. Not only written, but edited, formated, and covers done. Start to finish, less then three months.

I’ve done NaNoWriMo before. A hot sweltering mass of words tumbling out across the page. 50,000 word rough draft to show for it at the end. I’ve done it, several times.

But those are drafts. Incomplete. Unviewable by the general public. It took me another three months, after writing them, just to do the rewrites.

Once I completed “Forgotten Ones” my boyfriend showed up at my door with a dozen red roses, and a platter of sushi. If that’s what I get for finishing a short book, I can’t wait to see what I get when I publish a full length, 100,000 word epic novel!

As for the next book, I am hoping to get the two short stories I’ve been working on finished, and published, soon. One is a halloween story, and should have been up at the beginning of the month, so we’ll see.

For NaNoWriMo, starting Nov 1st, I will be working on two, or three, of my paranormal romances. They will probably be 30,000 words each, that’s why I’m doing two.

The best part about all of this is just finishing something, and being that much closer to a full time writing career… oh, and affording an editor to re-edit everything. That will be nice too. 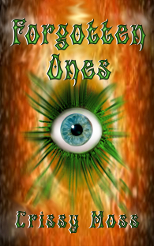 I am down to the final edit of “Forgotten Ones”, and adding in the last few scenes.

So I finished the cover.

Thank’s to David Wright for pointing me in the direction of Font Squirrel, and the twenty-eight fonts I downloaded last night. The one I used for the title and this cover is “Griffin”. An unusual font, to be sure, but I found it eye catching.

The cover depicts “the all seeing eye”, which is appropriate since “Forgotten Ones” is about the goddesses of Fate who share an eye. (Not literally, but we’ll get to that in the story.)

I will be so happy when this one is finished. It is 22,000 words long at the moment, and I still have a few thousand to go before it’s done. That puts it at short book status, and I will be putting out an ebook and a paperback, on the new Kindle Matchbook program. So if you buy the paperback you’ll get the ebook for free. It will just take a couple weeks longer for the print book to be available as I go through for a third edit, then format, and finally set up the printing. (And the Matchbook won’t be available till October, but if you buy print copies before October you still get them once Matchbook takes affect.)

I know, I know… so much of this must be fascinating.

Know this… This time all three fates are in the fight, and they learn something about themselves they had forgotten in their attempt to survive the rise of humanity. Something that allows them to defeat a god who has regained a lot of his former power.

This will be the description of “Forgotten Ones” when it goes live. (Or close to it.) What do you think?

The ancient gods lost the battle, and monotheism spread across the globe, forcing some into hiding, and others into a deep sleep.

Lost and forgotten in time, and unable to die, the immortal gods had to choose new paths. Some slept, letting time forge on without them. Some learned to prosper on the meager worship of a few adherents. Still others became dark brooding shadows of what they once were, obsessed with regaining their former glory.

The goddesses of fate, Clotho, Lachesis, and Atropos, chose a different path. They gave up some of their divinity, choosing to reincarnate rather then waste away in their godly bodies. By working with the Vatican to capture the dangerous god-lings, they shift the balance of power, letting man make the world his own, unhindered.

To trap the god-ling before he regains his strength, the Fates have to do something they haven’t done in centuries. They must tap into the divine power that once made them a force even gods feared. But at what cost? And what will their keepers do when the Fates remember their true strength?