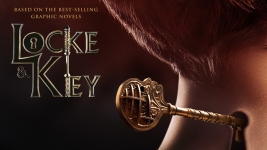 We just finished watching Locke & Key, the new netflix series and… I’m torn on what I think about it.

I have the complete series of Locke & Key graphic novels, though I have only read the first one. I found the whole idea of keys that magically unlock things to be fascinating. A key that you can unlock the mind and step inside the memories. A key that allows you to step through a doorway and separate soul from body. Each key a new experience and wonder.

So watching the new series was a must for me. And I have to say I do love the way they did most of the keys. You put them in a key hole, and unlock, or lock something. Except the fire key, that one is odd because all it does is light things on fire. No locks to go with it, just fire.

The story, itself, started interesting as well. It starts with three children and their mother moving to an old mansion left to them by their deceased father, but no one knows much about this house, or their fathers past. The father kept it all a secret. Then when the youngest starts finding keys with magical abilities they start to find a dark secret that they have to unravel before things go terribly, terribly wrong.

The secret of their fathers past is locked together with the traumatic way their father was murdered, and the emotional scars it left on each of the family members. Each of them blames themselves for different aspects of the death, and each of them have to come to terms with that perceived blame.

Where I think the story falls short for me is the lack of a cohesive plot. There is an ancient evil, a “bad guy” per-se, but the reason you are given for them to be at odds with the Lockes (the desire to get specific keys) falls apart in the end. They finally have access to the key they were searching for all this time, but they don’t take it for some reason. It left both my boyfriend and myself staring at the screen just wonder… but why? What was all of this for?

So, yes, I did enjoy it. I liked the mystery, and the magic. I didn’t like the ending. It was a bit too much of a cliff hanger with the family getting closer to one another, but the over all plot left hanging. And if you’ve read many of my reviews you probably already know I hate cliffhangers for the sake of cliffhangers.

Will I watch the next season? Probably. It wasn’t a bad series, and I would like to see what it does. However, I can say that if the second season doesn’t at least give the series a purpose, and some overarching plotline, then I probably wouldn’t go for a third season.

I will give them a little credit through, adapting a comic book series to TV can be challenging, especially with some of the visuals inside the graphic novels. They managed to do some interesting things with the mind key, letting us get a glimpse inside of several characters memories. They also simplified some of the plot between comic and tv series, so I will probably go back and read the comics now just to find those differences.