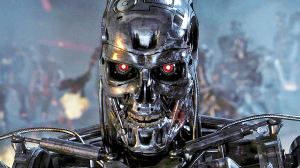 Of course when they announced Terminator Dark Fate I watched the trailer hoping for a great new movie….and it failed to compel me. All of the things I wanted, action, special effects, a touch of humor…not there. What they did have was an all female cast. That was the important point they had to tell me in this trailer. We aren’t protecting a guy who will save the world, no, this time it’s a WOMAN. The blatant “for women” mentality behind the advertisement completely turned me off. I’m not looking for girl power, I want a good story!

But when my roommate bought us tickets I didn’t say no. The three of us went off to the theater. I hoped for a decent movie, but my expectations were not high after the trailer.

Watching the movie I have to say that the trailers did not do the film any favors. The movie is a decent enough popcorn flick. Lots of action, a few great laughs, but no real meat to the film. It was a solid okay.

A few minor spoilers beyond, but I try not to be very specific.

A few things did bother me about the movie. One, they absolutely ret-conned a large section of the franchise. This is a series that deals with time travel, so it isn’t unheard of, but the way they did it felt like they were just dismissing all the previous movies as if they didn’t matter.

In fact when the new female hero finally meets up with Sarah Conner her reaction is…. “Who are you?” She has never heard of Sara Conner, effectively overwriting the previous history.

The best part of the movie was actually Arnold Schwarzenegger. He had the funniest lines, giving them in his usual dead pan terminator style. His action sequences were some of the best. He fought off the new terminator while the person they were rescuing stood by with wide eyes watching everything happen.

On that note, let’s talk about the new cast. We have Grace, the augmented human from the future who isn’t half bad. She’s kind of a bad ass, and kicks some butt. However, I felt like we didn’t get enough time to really get to know her as anything but a body guard. She hides the reason she is helping Dani until the end, and by then I just didn’t care enough.

Then there is Dani, the person Grace was sent to save. She almost seems to go from scared little girl to inspirational leader in five seconds flat. She lets others fight her battles for her. She keeps trying to run back into danger when she knows it will kill her. Over all she wasn’t an effective character. She isn’t going to be this inspiration just because future girl says so.

When I saw the original Terminator I felt like Sara Conner was an amazing woman who dealt with the bad hand that she was given, and made the best of it. She was scared at first, but she made every effort to fight for her life, and for everyone else’s life. She didn’t keep running back into danger, or stand around staring at everyone else fighting. She ran when she needed to, and she fought when she had to. She grew into something amazing so that she could inspire her son to do the same.

Dark Fate had the same problem that a lot of modern movies seem to have. The characters don’t grow over time, it’s more of an instant thing. Something happens, or a flip switches in their head, and all of a sudden they are a new, better version of themselves, if they grow at all. It’s unrealistic, and abrasive.

The last part that I found really cringy about the entire movie was the whole “they want you for your womb, not for you” part. Yes, I get it, Conner is pissed off at the world because her life was messed up, but the whole “we want you for your womb” part was over the top and reaching. Conner was a great character because her strength inspired her son to become who he was. That was the point. Without her he would have been nothing.

Still, the cringy parts are short, and easily overlooked if you just want a nice popcorn flick to get you through the weekend. It did have some great fight scenes, and the new terminator was kind of cool with the combination metal skeleton and liquid skin. And, of course, Arnold was fantastic.