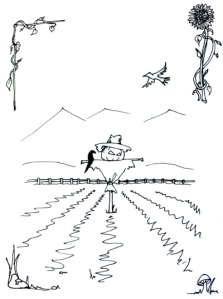 Perspective is a tricky thing. In drawing you pick a point in the distance, and you draw everything angled toward that point. But in life?

I’ve been working on “Mermaid’s Curse” since last November. I had written a really basic 1000 word plot before then, but I really started working on it during NaNoWriMo. Now that NaNo is just a month away I am acutely aware of the fact that it’s been almost a year and my novel isn’t finished yet.

But let’s get some perspective. This is the third novel I’ve written. The first two took me five years each to complete, and the first was TERRIBLE. The second is still sitting on my hard drive awaiting a day when I might finally be able to fix it, because it’s a good story, I just wasn’t a good writer when I wrote it.

“Mermaid’s Curse” is now 93,000 words long. It’s the longest single work of fiction I’ve ever written. And I think it’s good. Okay, it needs editing, and maybe a little trimming here and there, but I wouldn’t be embarrassed to let people read it. More importantly: I’m almost done with it.

I’m seven chapters away from pushing the novel away and saying “YAY! It’s done! I can give it to the editor and not look at it again for a while!”

Self imposed deadlines tell me I’m slow, lethargic even, as I watch other writers churn out thousands of words a day while I barely manage 500. That critical voice tells me I should have had this done MONTHS ago as I still struggle over how to write the final battle scene.

But one year is so much better than five! I should be excited and happy, even a little proud of myself that I am writing as quickly and well as I am at the moment. Not only did I write thirty-seven chapters of high fantasy adventure, I did a full edit on thirty of those chapters, and polished them as well as I was able. Seven more chapters, and a final polish, and it will be FINISHED. In a year.

When I take a step back and get some real perspective it makes me excited for the next project. Each one goes a little faster, so maybe the next novel will be done in six months. The next one after that in three. One step at a time.

If something isn’t quite going the way you want it to just take a step back and look at it from a different angle. Maybe from a new perspective there is still something good about the situation. Lost your sock? SHOPPING!  Lost a job? Great time for a new one. Computer blew up? You needed an upgrade anyway. Computer crashed and you lost your almost complete novel? (Okay that one sucks, go back up your novel right now!)