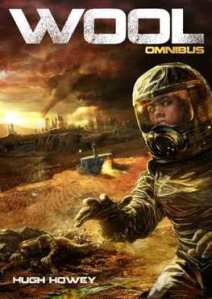 This was an amazing read. A post apocalyptic look at a world trapped inside of a silo.

And while I admit that half the reason to continue reading the story is trying to piece together how the world got into this state (nuclear war? Meteor? Disease?) the true story is the examination of how people would react to being stuck in such a small space together, underground, for generations.

Imagine having only a few thousand people stuck inside the empire state building. Not just for a few years, but for generations. Then put the whole thing underground with no sunlight, no fields  no room to grow or expand. What would you have to do to keep them from overpopulating? From killing one another? From over eating or escaping?

And the how of it all… how did the silo start? Now that answer was quite revealing after all…

“Wool” began as one self published short story that took off. Since then Hugh has written several installments and is on “Wool 9” at the moment. He continues to self publish each of his books, though he now goes through a traditional publisher for his over seas sales.

It was a shocker not long ago when Ridley Scott nabbed wool for a movie option. But as Hugh says, just because someone has the option doesn’t mean the movie will be made.

2 thoughts on “Wool by Huge Howey”