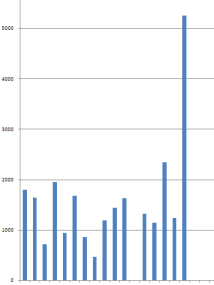 I’ve been working on my second novel for The Half Blood Sorceress series for a while, and pushing through the knots I made in the plot, trying to unravel everything. It was getting to the point I just didn’t want to look at it anymore.

So I set it aside for a week and wrote something different. Here we have a graph showing my word count per week since the beginning of this year. This week I set aside my usual work and I wrote a litRPG. I’m currently about half way done with it, and loving it. I love that the words came so easily, even though I didn’t really have a plot at the beginning. But the plot really took a hold, and after talking to Bjorn about it a bit he asked a couple questions and that made the plot so much better. It became a full story instead of just a little snippet of an adventure.

So far I have written at least twice as much each day on this new story. Something about it is just fun to write. And that fun keeps me coming back to it, writing more.

I think the Half Blood Sorceress became work instead of fun once the plot got so out of hand that I was actually considering rewriting ten chapters instead of just editing it. I’m still considering rewriting, or dropping a few of the chapters, and that doesn’t seem like much fun, so of course I have put it off some more. But don’t worry, I won’t be doing that forever, just for this week.

You know that saying “do what you love and you’ll never work a day in your life”? It isn’t entirely true. Bjorn works a lot, and he loves what he does. But even when you love what you do there are some days when it isn’t as fun, and he has to slog through a bit to try and get it complete. He keeps going because eventually the work will be done and he can get back to the fun part. There is something he loves just waiting for him to complete the slog so he can get back to the good part.

It’s the same with any skill, really. Learning a language? You have to practice. Learning an instrument? Repatition isn’t fun, but you learn faster that way. Writing? Sometimes you just have to push through and get it done. Throw away, cut, rewrite, and continue.

And sometimes you need to set it aside for a bit and have some fun. Knowing when to do that is the trick. Knowing what the best course of action, and what you can finish, makes a huge difference.