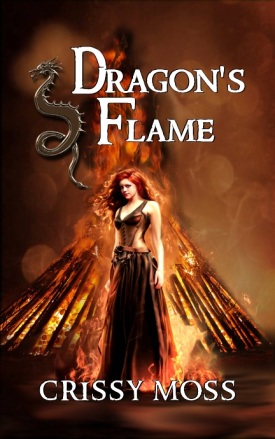 I’ve been working on the new cover for the first book in “The Half Blood Sorceress” series. Book one, Dragon’s Flame, is finished. Well, the first draft is. I have a few things to clean up before sending it off to the editor, but I am hoping to have it out soon (in relitive terms).

The back of the book:

A tragedy. A secret. A journey to find the truth.

Sybel watched as her mother burned on a funeral pyre, but she never expected her father to push her into the flames. When Sybel survives the pyre without a single burn she’s banished from the village for reasons she doesn’t understand.
With more questions than answers, Sybil’s only hope is to make a treacherous journey to find the wise mages of Kemoor. As she ventures out beyond the edges of her village she finds a world filled with dangers; massive creatures, vindictive humans, and an ice cold wind blowing from the north. A wind that is far more sinister than anyone suspects.
Now the girl who would not burn must trust in unlikely allies to save her life, and discover the truth…

And the best part is I’ve already written most of book two. I’m hoping to have books one and two out this year, with the third one next year some time. I have at least a five book arc for this series.

The Half Blood Sorceress is different in a lot of ways, and so is the experience of creating the world, and writing the stories. I honestly can’t wait to get it out and hear what others have to say about it.