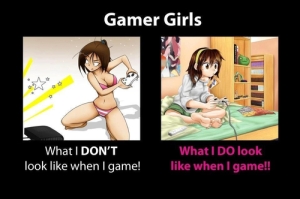 Anyone who knows me knows that I have an addiction. I spend far too much on video games, humble bundles, and steam sales. I play far too many video games when I should be writing. In general… Hi. My name is Crissy, and I’m a game addict.

I own 281 games on Steam. I have a binder FILLED with more games like Baulders Gate, Settlers, and Might and Magic. Games that I love, and sometimes install just for the nostalgia. That isn’t even considering the consoles I own, and all the games for each of them.

I don’t finish a lot of games. Most of the time it’s because the game looses my interest and I go off to the next shiny thing. Sometimes it’s because the game is too difficult for me and I’d rather just watch someone else play it on a let’s play. Sometimes it’s just not my type of game and I never get past the first few levels. But I’ve been playing games since I was a teenager, and own a lot of consoles to prove it, so I’ve also had my share of completions.

Why am I talking about video games? Because this week there has been a HUGE upsurge in interest regarding Anita Sarkeesian and her “Tropes vs. Women in Video Games” series. Most of it started because of the controversy around Zoe Quinn and the accusations that her ex boyfriend leveled on her.

Now, let’s reflect for a second that Zoe’s EX BOYFRIEND accused her of things and tons of people just jumped onto it without even considering where the source came from. I don’t presume to know if it happened or not, I honestly don’t care at this point. What I do know is that it is a suspicious situation, and people on both sides of the Quinn debate have been assholes to each other, and especially to Miss Quinn herself.

Then there is Sarkeesian, the controversy surrounding her kickstarter and where the funds went. The rumors about her statements that she didn’t even like video games. Reports that she stole art images and let’s play footage. Then her portrayal of games as “sexist” without even really looking into all the information about the particular game she called sexist. All of that, but she still didn’t deserve the threats and late night calls that she received. So many that she left her home to take refuge elsewhere.

On the video game side: Yes, video games could use a little more dimension in the way they portray women. Yes, video games can sometimes seem sexists to some people. Yes, there is a conversation to be had. But let’s be honest about the portrayal of women in games vs. reality, shall we?

Violence toward women: Yes, there is violence toward women in some games, and toward men as well. I cannot tell you how many male guards I’ve sniped with arrows from the safety of trees. Or necromancers hacked down by swords. Or warlocks dissolved in a blast of acid burst. So because one of the NPC’s is female I should feel bad about killing them? Doesn’t that seem misandristic to anyone else?

Some video games are violent, that’s their nature, and I love those games. Any RPG or strategy game has killing of both female and male characters, more often male than female.

I do realize that some of the instances noted in Miss Sarkeesian’s videos regard women who are beaten/killed/abused specifically for plot, and in cut scenes. Guess what: it happens to male NPC’s also. So you are no longer arguing from a feminist standpoint, you are either arguing that it is okay to beat up men in video games but not women, or you are arguing that all of  this violence needs to be removed. We’ve already argued about violence in video games till we were blue in the face, and we already decided we, the gamers, like violence in our video games. It’s no worse than going to see Saving Private Ryan or The Expendables. And I would argue that if women want equality they should expect to be treated equally in all ways, including plots in video games.

Prostitutes in games: I do admit that it is annoying when the ONLY women in a specific video game seem to be prostitutes. That is shallow and lazy on the game designers part, but not as much sexist. They could add different kinds of women with actual personalities if they took the time to do so, and should. I also understand that most prostitutes depicted in video games are represented as having no choice, trying to escape, often drugged out, or worse. And that some games give you the option to beat them up, and kill them. (More Here)

But prostitution also has the widest variety of people involved, from those working in high class establishments where it is legal, to those who are trafficked in slavery, their passports confiscated, hooked on drugs, or worse.

Video games, like other art forms, try to depict a certain aspect of reality for a specific reason. Even the gritty parts. Even the horrible parts. This doesn’t always mean that the game is an accurate portrayal, but some games go to just as much length to give the prostitute a personality as they do the plumber and should be judged according to that specific work, and not some arbitrary belief that “prostitution should be depicted in a negative light.”

I’m just going to point out that there are some fantastic titles out there where women are not portrayed as sex objects or window dressing. Dragons Age, Mirrors Edge, Portal, Megaman, Zelda, Might and Magic, and any military strategy game that includes female characters dressed in fatigues.

I’m also going to point out that many of these titles that people label as “sexist” also have male figures that are overly muscular fantasy versions of male figures. Both male and female avatars follow the heroic figure of the superhuman body form. It is an excepted artistic style and has been for a very long time. It isn’t more sexist to render women this way then it is the men.

I’m also going to say F you for telling me that I shouldn’t be playing a sexy mage with big boobs and a slinky robe while she casts magic armor on herself. That’s my fantasy. I want to play it. And I’m a woman.

It bothers me that there are still people out there who want to shame women for being sexy, because that is what it amounts to. Ya, I know the whole “only men play these games” attitude, but no, I play these games and I’m female. I know other women who play these games. I know women who enjoy dressing up as these characters at conventions. Every look at a cos play website? THOUSANDS of happy women dressing in slinky, or beautiful, or just amazing outfits because they feel good, and beautiful, and appreciated.

This is the new form of slut shaming, and it pisses me off. As an avid gamer, and as a woman. If I want to dress slutty in a video game then that is my issue and stop fucking with my games. If I wore a bikini down to the beach would you tell me to go put more clothes on? If I wore Daisy Dukes and a tight tang top would you judge me? Probably. I’d probably do it anyway if I had a body for it. And is that any less feminist then covering up and being “modest” because it makes you feel better?

The REAL problem behind all of this isn’t the video games. It’s the (mostly) male group that attacks anyone who says “video games bad”. I agree that Anita Sarkeesian’s commentary is over generalized, and wrong on many levels. I agree that she’s got an agenda, and doesn’t love video games like most gamers do. But… the actions of that segment of the gaming community that has attacked her, and Ms Quinn, is repugnant in nature.

Let’s be quite plain that these two women are not the only ones to have been attacked via this nameless hoard. There have been several let’s plays that just stopped because they were done by females and some of the male population did nothing but harass them with sexual innuendos and threats. There are many more that choose to stick around. You just have to go read the comments for any female youtubers channel and you will see why it’s so difficult at times. And it isn’t just gamers, either. It’s any woman, like Brain Scoop, Brain Craft or Felicia Day. It’s disturbing and disgusting at times.

This isn’t about video games. To blame video games for the misogyny going on is just as bad as trying to say playing CoD made a teenager go into a school and shoot people.

This is a much deeper problem, and by blaming or focusing on video games we aren’t addressing the actual issues. It is NOT okay to threaten women, or men, with rape and death. It is NOT okay to harass people, post their personal information, or stalk them.

And it isn’t okay to blame the video games I love for this behavior. Like I said, read youtube comments. It doesn’t take a game to draw that out in people.