Gender. It’s rarely as cut and dry as male and female in this century, but it still influences a lot of things, and people.

Right now the writers forums, blogs, and news sights are blowing up with articles and commentary about gender roles in SF and fantasy. Articles about women who hide their sex so they can break into the elite ranks of SF, and those that question if they are starved for great women authors, or just sexist. A Tor UK team member even weighed in on the matter, complete with graphs. 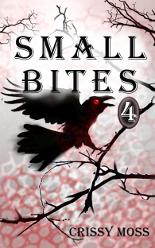 I will be putting up “Small Bites 4” tomorrow which is Science Fiction. It is the first time I will be sharing my science fiction writing. I’m kind of nervous. I’ve done stories with horror, blood, torture, rape, abuse, and sex. I will never be as nervous about them as I am about something that delves into the science fiction (except maybe erotica).

Why? I chose to use my personal name on my books. “Crissy Moss” isn’t a pen name. It’s me. I kept it because I’m one of a very few people online with that particular name. And it is incredibly feminine. I can’t hide behind “Chris” and still be visible. I chose this.

It’s odd that the two genres that worry me are on complete opposite sides of the spectrum. I am afraid to publish in erotica because I don’t want people to judge me because I am a woman that likes sex. And I am nervous about publishing in SF because I know people will judge me for not being steeped in science enough.

Caring what other people think about us… man or woman, this simple foible is enough to keep people lost, alone, and unable to attain their dreams. This very simple fact is why I won’t sit back and let my stories sit on a hard drive collecting virtual dust. Accolades, comments, and compliments are nice, but being true to yourself is far more important. It’s worth risking one star reviews, flops, and hate mail.

I do know that it isn’t just about women. Male authors trying to break into erotica often have to use pseudonyms as well, and they usually have to be female, or non-gender names.

And it’s about readers, too. Readers sometimes wont get past the name on the book.

Gender is more fluid then we think it is. Anatomy doesn’t make us who we are. People can change sexes, or act in non-masculine and non-feminine ways, regardless of the equipment birth gave them. There are even those among us who have no affinity to either sex.

Some articles about the subject:

Is the book industry sexist or just starved for great women authors?

Women Who Pretended to Be Men to Publish Scifi Books

The best women authors of science fiction and fantasy

The Greatest Female Sci-Fi/Fantasy Authors of All Time

4 thoughts on “Publishing, Gender and Genre”